Mark your calendars and save the date now – KalTour 2019 will be held on Saturday, June 29.  Yes – that’s right – we are holding KalTour on a Saturday this year in hopes that more people can participate.

New this year is the addition of a Gravel Fondo including two gravel routes of approximately 60 and 30 miles.  These gravel routes are in addition to our lineup of paved road routes of 100, 62, 31and 15 miles, as well as a guided 10 mile family route.

The Kalamazoo Bicycle Club is hosting an All-Bike Open House on May 14, during Bike Week. The event is open to the public and designed to appeal to cyclists of all abilities and styles. More than a dozen area cycling organizations and businesses will be there to talk about the services they provide. Local bike shops, community service organizations, and bicycle advocacy groups will be represented. The All-Bike Open House will take place on Tuesday, May 14 from 7:00 to 9:00 pm at Boatyard brewing, located at 432 E. Paterson Avenue in Kalamazoo.

“The Kalamazoo community is incredibly fortunate to have so many great organizations supporting cycling and making this a great place for cyclists of all kinds,” said Doug Kirk, President of the Kalamazoo Bicycle Club. “Whether you like back roads, trails, gravel, or commuting around town – there’s cycling here for everyone, and that’s all made possible by the dedicated organizations who work to make cycling safe and available to everyone,” said Kirk.

The Kalamazoo Bicycle Club is a non-profit, formed in 1971 to promote bicycling in the region. The club’s activities include cycling safety advocacy, club rides, racing, touring, and development of a bicycle-friendly infrastructure. 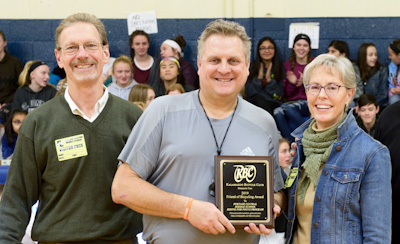 Through the Ride for Focus Program, Mr. Dunlop, along with the support of other school staff members, has exposed more than 700 students to the sport of cycling. John has also offered bike-handling clinics for parents and staff of the school, many of whom now share a love for bicycling.

KBC’s Friend of Bicycling Award goes to an individual, organization, or other entity who has significantly advanced the interests of bicycling.  This year’s award was presented to Mr. Dunlop at an all-school assembly in late January by KBC President Doug Kirk, Vice President Paul Sotherland, along with KBC members Kathy Kirk, Pam Sotherland and Zolton Cohen.

The Kalamazoo Bicycle Club is a non-profit, formed in 1971 to promote bicycling in the region. The club’s activities include cycling safety advocacy, club rides, racing, touring, and development of a bicycle-friendly infrastructure.

Okay…we’ve barely said good-bye to Daylight Savings time (and to what’s left of the 2018 riding season) and we’re already thinking about Recovery Party time. Yes, the 2019 KBC Recovery Party will land on the last Saturday in January as always (January 26, 2019 from 7:00-10:00 pm). But, our usual venue will not be available for our gathering this year. So, thanks to Jamie and Windy Clark, we’re having the 2019 Recovery Party at the Clark Logic event facility, 555 Eliza St (W Avenue) in Schoolcraft, just 5 blocks east of US 131.

Here’s a Google Maps link to the location https://goo.gl/maps/suGsaH9L2FP2

Since a picture is worth 1,000 words, we’ve included a few photos of the venue. There is ample parking (and free, incidentally) right next to the building. We’re hoping you’re as excited as we are to celebrate the Recovery Party at this new location. We will keep you posted on details as we draw closer to January 26, 2019. Enjoy celebrating Thanksgiving, Christmas, and the New Year first!

Regularly scheduled KBC rides – on Monday and Wednesday evenings – for the 2018 riding season are a thing of the past. With the upcoming Fall time change on Sunday, Nov 4th, riding in the evenings means riding in the dark, and we’d rather not do that. Below are the folks who turned up for the final Monday Nite Ride for 2018. Great rides were had by all on a beautiful, clear and not too chilly fall evening.

It has been a great riding season. We had 33 Monday Night Rides – one was officially cancelled due to thunderstorms – and 34 Wednesday Night Rides. If we had been keeping records, we would likely find that we had a record year for rider attendance – especially in the fall. We had several summer evenings with 90+ riders at the Monday Night Ride. And, many of us don’t remember ever seeing so many riders post-Labor Day on Monday nights, especially in October.

Thank you to every cyclist who came out and rode with us, including the Tuesday Night and Friday Morning Women’s Rides.  We extend an especially big thank you to everyone who served as a ride leader this year, again including the Tuesday and Friday Women’s Rides!
Regularly scheduled KBC rides for 2019 will begin asap after March 10, 2019 (at 2 in the morning!) and, based on good authority, will be even more fun and satisfying than they were this year.  So…weather permitting, the next Monday Nite Ride will be on March 11, 2019.  And, Wednesday Nite Rides will recommence on Wednesday, March 13, 2019.  Both regularly scheduled rides will continue through October 2019.
Thank you all again for riding with us! We are already looking forward to next season.  Now..take a break then get in shape for next year.

Here https://gravelmap.com/#@42.4245487789684,-85.74318315429684,11,hybrid is a very cool link, brought to you by Steve Cox, via Doug Kirk, to more potential gravel routes than you could possibly imagine.  So, next time you feel a hankerin’ for some groading, consult this map, ride the route you choose, record the route on your phone in Ride with GPS, and then send your route (if it’s a good one) to Dale Abbott (communications@kalamazoobicycleclub.org) for uploading to the KBC Routes Library on Ride with GPS.