At its August 2017 meeting, the Kalamazoo Bicycle Club membership voted to approve a resolution in support of a  state-wide five-foot passing law and send it to State Representatives and Senators representing districts where KBC rides take place. Signed copies of the resolution, along with copies of news articles of bicyclists who had been injured or killed in our district, were to Representatives Jon Hoadley, Brant Iden, David Maturen, Beth Griffin, Aaron Miller, Mary Whiteford, and Julie Calley and to Senators Mike Nofs, Margaret O’Brien, John Proos, and Tonya Schuitmaker. 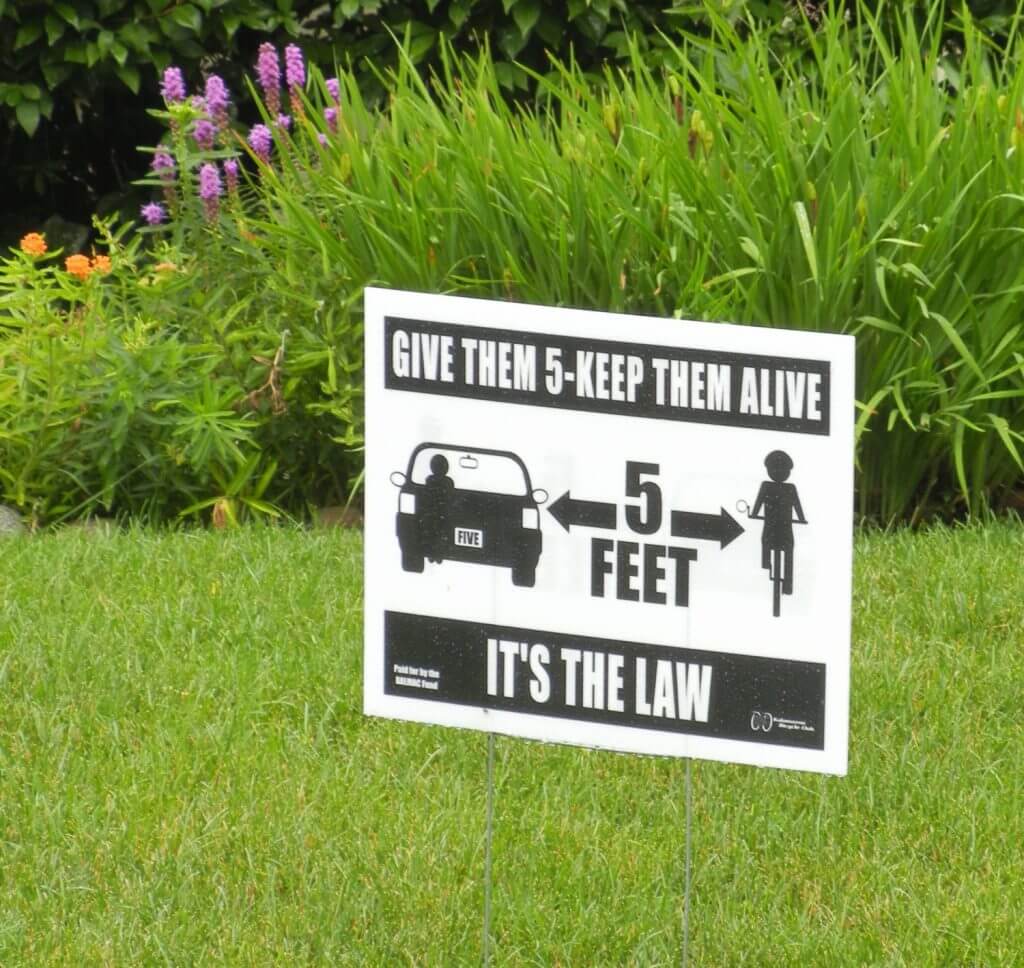 With a grant from the DALMAC Fund, support from KBC coffers, and donations from several bike-friendly supporters  the “Give Them 5” education campaign is underway.  Initiated and organized by Paul Wells, chair of the KBC Education Committee, the campaign is aimed at raising motorist and bicyclist awareness of recently approved five-foot passing ordinances in Kalamazoo, Portage, Kalamazoo Township, and Oshtemo Township.  As a means of getting the word out, yard

signs are already beginning to appear along streets and roads in the Kalamazoo area. Available to anyone willing to put the sign in their yard, these signs can be obtained by sending an email to Paul Wells educationchair@kalamazoobicycleclub.org, who will also happily accept donations to KBC in support of the education campaign.

Kalamazoo Township joined Oshtemo Township, Kalamazoo & Portage by enacting the very same 5-foot ordinance at its Board meeting on May 22.  Supervisor Ron Reid and Trustee Steve Leuty were the key players responsible for getting it done.

Ordinances in Kalamazoo, Portage, Oshtemo Township, and Kalamazoo Township require that vehicles must stay 5 feet to the left of bicycles while passing.  Learn more about this ordinance and about what it means to pass bicycles safely at this MLive link http://www.mlive.com/news/kalamazoo/index.ssf/2017/03/dont_crowd_bicyclists_new_law.html?ath=c5e827861055272429dc125b7b938c1f#cmpid=nsltr_stryheadline